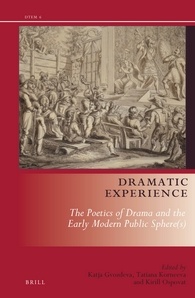 Over the last decade, Brill’s Drama and Theatre in Early Modern Europe-series has established a reputation in the study of early modern vernacular and Neolatin dramatic theory and performance, particularly on the Continent. The present volume, the outcome of a conference of the Early Modern European Drama and the Cultural Net project at the Freie Universität Berlin, makes a solid contribution to an already strong series. In eleven chapters spanning a wide geographical area ranging from Italy, Germany and France to Russia and examining an equally wide range of historical contexts and methodological approaches, the editors seek to examine ‘how the convergence of dramatic theory, theatrical practice and various modes of audience experience’ (1) worked to shape audiences into publics, and contributed to the rise of a public sphere, or perhaps more correctly, public spheres. The volume is prefaced by an introduction of admirable clarity and concision that establishes the shaping intellectual paradigms of the book: the scholarship on the public sphere in early modern Europe that developed in response to Habermas’ Strukturwandel der Offentlichkeit, the work of Joachim Küper on early modern drama as massmedium, and the work of Carl Schmitt, Walter Benjamin, Louis Marin and Hélène Merlin Kajman on the theatrical construction of sovereignty.

The essays are almost without exception extensively researched, insightful, and at times innovative in their approaches. Deborah Blocker’s chapter on Jacopo Peri and Ottaviano Rinuccini’s musical drama Euridice, performed at the wedding of Maria de’ Medici to Henry IV of France, is a test-case example of the gains to be had from combining meticulous historical contextualization with attention to poetics and staged performance. Connecting the performance to the poetic and political views current within circles of the Florentine Academia degli Alterati, with which Rinuccini was associated, Blocker argues that the drama figures the relationship between the political power of the Medici court and its poets, musicians and patrons, in a way that emphasises the autonomous creative power of an art. The Italian Academies, in this case the Sienese Accademia degli Intronati, are also central to Katja Gvozdeva’s stimulating chapter on gender riddles and fool’s play in the comedy Gli’Ingannati (1532), that ought to find an audience reaching beyond scholars of Italian drama, to those interested in Renaissance cross-dressing performances on stage. In a carefully constructed argument that combines an anthropological perspective on the function of societies like the Intronati with an analysis of the comedy’s structural form, Gvozdeva claims the actions of the comedy’s cross-dressing heroine should not be seen as an exploration of gender ambiguity, but presents a visual and verbal riddle that works on several levels. Thus, Gozdeva argues that the ritual logic of the comedy shows us that the ambiguity created through the staging of cross-dressing is a ‘controlled uncertainty’ of public events that performs a similar function to that of rites of passage (71).

Both the contributions of Gozdeva and Blocker; Kilian’s chapter on the creation of reading audiences in De Rojas’ Celestina and Machiavelli’s Mandragora, and that of Tatiana Korneeva on Carlo Gozzi’s L’amore delle tre melarance show the multiple, complex and overlapping forms in which the early modern publics took shape, and the complexity of the relationship between political power and artistic creation. Other essays, such as Hans Rudolf Velten’s essay on devils on- and off-stage in early modern Germany and Toni Bernhart’s contribution on popular theatre in Tirol examine the formation of audience into public from an urban or regional perspective. Kirill Ospovat and Nigel Smith’s chapters, by contrast, both focus their approach directly on the theatre’s relationship to sovereign power. Ospovat’s illuminating contribution on Sumarokov’s Russian adaptation of Hamlet, Gamlet (1748), a play that is commonly understood to dramatically re-enact Empress Elizabeth’s coup d’état, focusses on the play’s most significant departures from its source: Gamlet’s decision to condemn, and ultimately pardon, the guilty Polonii/Polonius. Examining the political context of the Elizabeth’s coup and the dramatical explorations of theme of royal pardon, such as Corneille’s Cinna and La Clemenza di Tito, Ospovat’s chapter explores the ambivalences of clemency as a marker both of absolute power and divine mercy, a highly theatrical effect ‘that grounds sovereignty in a strong emotional affect that is evoked among the publics both on and off stage’ (209). Nigel Smith’s learned and deeply-researched essay on a martyr-drama about the assassination (lynching) of the brothers De Witt by the Dutch Collegiant Joachim Oudaen, Haagsche broeder-moord, of dolle blydschap (Fratricide at The Hague, or, Mad Joy) (1673) offers an powerful counterpoint to Ospovat’s essay, by showing how Oudaen, a supporter of the De Witt-regime, intended his play not merely as a political statement, but as an aesthetic reflection on, and condemnation of, ethics of political violence.

To both these essays and the purpose of the volume as a whole, Stanca Scholz-Cionca’s essay on nô theatre as cultural capital offers an illuminating comparison. Her contribution shows how during the Edo period nô gained heightened political significance as an instrument for the Shogunate to strengthen their dominance over the provincial powerholders, and as a tool for the self-fashioning of the Samurai elites, to the exclusion of the wider populace, who were increasingly reduced to the role of occasional, passive spectators. Despite these strictures, the influence of nô nevertheless extended downwards through a variety of other theatrical forms such as kabuki and puppet theatre, through the circulation of printed nô texts and practice of the chanting, thus contributing to formation of a national culture.

There are also some quibbles. The volume is heavily weighted towards Italian drama, a decision which the editors defend on grounds of Italy’s dominating position both in terms of theatrical production and poetics and criticism. While this is no doubt true, a distribution of five out of eleven essays nevertheless feels somewhat unbalanced. Seeing the powerful cultural influence radiating outwards from the French court at Versailles, and the impact of French dramatists such as Corneille and Racine and dramatic theorists such as André Dacier, it is somewhat of a pity that the only essay on French drama, by Logan J. Connors, although lucidly written, is rather on the short side. Another question that remains unaddressed is that of the dialectical tension between the development of distinct national theatre cultures, and the international dimension of certain forms of theatrical practice, such as the translation of Spanish playwrights such as Lope Vega and Calderon into English or Dutch, or the activities of the strolling players; or between the national and regional public spheres, and the transnational public spheres created by the confessional conflicts of the Reformation and the Thirty Years’ War. Another question about the nature of the early modern public sphere is the absence of religion from most of the essays. Pointing to the lacunae in an otherwise varied and diverse collection of essays is always a bit of a shot into an open goal. But in a volume which expressly addresses the question of the creation of publics, the absence of a consideration of the role of Jesuit drama, or of that of the auto sacramental, is nevertheless striking, making the reader wonder about the implicit assumptions about the nature of the public sphere at work here. Despite these reservations, this is a stimulating and thought-provoking book, which will be gratefully received by scholars of early modern drama eager to look across the boundaries of their own specialism.