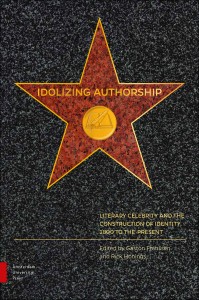 Idolizing Authorship places itself on the borderlands between the sociology of literature, celebrity studies and good old hermeneutics. Throughout eleven case studies, delivered by as many scholars, the phenomenon of the ‘star author’ is approached from a variety of angles. Analyses are given of, for example, the ‘posture’ – i.e. the different discursive and non-discursive expressions surrounding an authorship, meant to make clear what kind of author we are dealing with – of such authors. Or of the ‘fan culture’ surrounding them, both while they were alive and posthumously. Or of their literary and nonliterary texts, which some contributors to the volume interpret as explorations of the theme of literary celebrity. The result is an exciting, kaleidoscopic exploration of, as the volume’s subtitle has it, ‘literary celebrity and the construction of identity’.

In their clear, concise introduction, the editors point at several, as they call it, ‘tension fields’ (16) surrounding literary celebrity. First of all, they argue that literary celebrity is not semantically constant throughout time. Apart from the fact that calling Oscar Wilde or William Shakespeare ‘literary celebrities’ is an anachronism, their fame was certainly different from that of later celebrity authors surrounded by media hype, such as Gertrude Stein or Ernest Hemingway (16-17). Secondly, celebrity culture is never the only context in which a star author moves. Literature has its own field, with its own institutions, one that often is quite averse to ‘the popular entertainment, commerciality and mass production’ belonging to celebrity culture. Thus, the star author finds him- or herself in two diverging fields. The researcher analyzing such an author then has to decide whether literary celebrity should be seen as first of all ‘literary’ – i.e. based upon recognition within the field of literature – or as ‘celebrity’ – i.e. based upon ‘sales figures and media attention’ (17). Finally, there is a tension between ‘authorial self-presentation and public appropriation’ – between how celebrity authors present themselves and how the public perceives and re-presents them.

All of the case studies that follow explore at least one or two of these tensions. This makes the volume remarkably coherent and, frankly, a pleasure to read. Star authors from a wide variety of literary contexts are discussed. There are historical examples, such as Johann Wolfgang Goethe – and a star author he was, as is shown with the help of pictures of contemporary merchandise such as marble and terracotta busts of the author depicted as an Olympian deity, as well as porcelain with scenes from his famous Die Leiden des jungen Werthers. And there are more contemporary case studies, such as Finnish author Sofi Oksanen, who is equally famous for glamourous photo sessions in women’s magazines that show off her striking gothic style, as for being a controversial public intellectual. Thus, the volume offers both internationally well-known and more nationally confined cases of literary celebrity. Most of the volume’s readers will be acquainted with Goethe, Ibsen, Proust, Ezra Pound and Haruki Murakami. That will probably not be true for authors such as the nineteenth century roguish Dutch poet Nicolaas Beets (‘The Dutch Byron’, as Rick Honings, who wrote this chapter, calls him, although he also points out that the extent to which Beets can be called a Byron is questionable), the Danish Holger Drachmann from the same period, who was an expert at, to use another anachronism, personal branding, and the social media-savvy contemporary Russian poet Dmitrii Vodennikov for who the author of the chapter devoted to him coins the delightful – and useful! – term literary e-self-fashioning. While looking at the more internationally well-known case studies, such as Goethe, from the angle of celebrity studies provides a refreshing new perspective, the more nationally confined case studies offer a smorgasbord of different expressions of literary celebrity in different contexts.

Some chapters, such as the ones devoted to Louis Couperus, Haruki Murakami and Sofi Oksanen, offer fascinating author portraits. Often, the author is shown as struggling with on the one hand a desire for an acknowledgment beyond the literary field in the form of fame – either for its own sake, or because of the opportunities for intervention in the public debate or the financial security that may come with it – and on the other hand the erosion of their perceived authenticity and literary credibility that may be the result of such acknowledgment. Other chapters go beyond merely offering a portrait and give an analysis of the sociological, institutional and psychological dynamics that come with literary celebrity. The methodologically very thorough chapter about Holger Drachmann by Henk van der Liet is probably the best example of this. Drachmann is placed in the context of the ‘rise of the personality cults’ that took place in the latter part of the nineteenth century, as well as the phenomenon of the ‘literary copywriter, who no longer had a steady source of income […] and who was exclusively dependent on the sale of his or her texts’ (110-111). In regard to the latter, Drachmann managed to have his cake and eat it too, by on the one hand presenting himself as the antithesis of the copywriter, as living a bohemian life for the sake of art only, while on the other hand using precisely that image to stay ‘in the picture’ and thereby keeping ‘himself afloat’ (113), a double game that is played by many of the authors discussed in this volume.

My only criticism of this volume would be that the case studies are presented rather compartmentalized, never referring to each other. This is a missed opportunity. One only needs to note how both the chapter about Nicolaas Beets and the one about Holger Drachmann discuss the intense relevance of Byron for both authors, or see the similarities through space and time in the ambiguity with which many of the authors presented in this volume relate to their own celebrity (often through the use of irony – either romantic or postmodern – in their posturing) to see how fruitful a more dialogic approach, either through cross-references within the case studies, or through a discussion by the editors in the introduction, could have been. All in all, however, this volume is a rich and welcome contribution to the study of literary celebrity, as well as related fields of inquiry such as the sociology of literature and celebrity studies.