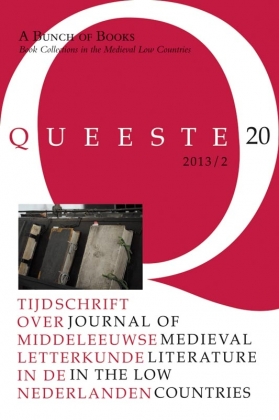 Although the importance of book collections for the study of book history has long been acknowledged by scholars, the study of the collections themselves has often proven to be problematic. The reason for this, according to the editors of this issue of Queeste, Folkerts and Gabriël, is the difficulty to access the primary sources that this kind of research relies on. Consequently, the research output on medieval book collections has remained relatively small. To initiate further consideration of the relationship between books and their context as part of a library or a collection, Queeste organized a conference on this theme in February 2013. Four of the speakers’ essays were published in its 20th issue.

Albert Derolez’ article ‘Medieval Libraries in the Low Countries – Thoughts for an Integrated Approach’ opens the collection of essays. Derolez focuses on the study of medieval book lists and their value for the study of the use of medieval libraries. It is his aim to shed light on the ways in which texts could be retrieved in medieval libraries and to examine to what extent books were actually read. He draws on several medieval library catalogues, from the eleventh to the fifteenth century, to find answers to the following questions: how were new library acquisitions entered and changed in the book lists and how were miscellaneous manuscripts described in such lists? Furthermore, Derolez illustrates how books were not just lent to, but also sold to, individuals by consulting ecclesiastic book lists. In this way, he presents insightful examples of methods for studying medieval library collections and their catalogues.

The second article of the collection is ‘Book Collections and their Use – The Example of the Library of the Dukes of Burgundy’ by Hanno Wijsman. Wijsman’s article investigates dynastic book collections in order to determine the use and contents of these libraries. His work consists of two thorough case studies of the book collections of Philip the Good (1396-1467) and Philip the Fair (1478-1506). The former was responsible for extensive additions to the library’s collection and the latter showed a particular interest in French translations of classical texts in late fourteenth-century manuscripts. Wijsman also considers how the library of the Burgundian dukes continued to be used throughout the century. His survey of this particular royal library is a fine example of the study of the development and use of a dynastic book collection.

Another library collection is the focus of Ad Poiters’ article entitled ‘The Beckers Connection – Some Thoughts on the Latin Books of Hours in the Soeterbeeck Collection’ Poiters approaches the Latin Books of Hours of this collection from a statigraphic and contextual angle. He investigates the different ways in which Arnoldus Beckers, who served as the rector of Soeterbeeck Priory between 1772 and1810, engaged with the collection by categorizing the notes he left in some of the books. Poiters argues that such textual emendations are closely related to the ways in which these books were used. To illustrate this, he provides a case study of the function of the Hours of the Virgin for communal use, and demonstrates that the traces of use can shed new light on its role in reciting the canonical office. In this way, Poiters convincingly argues in favour of a contextual approach to the study of book collections.

The last study of book collections in this volume is Ryan Perry’s ‘An Introduction to Devotional Anthologies – One Volume Collections and their Contexts’. Rather than studying a collection in the classic sense of the term, Perry considers miscellaneous manuscripts themselves to be a collection in their own right. His essay explores the production of such manuscript collections by paying special attention to the make-up of the Simeon and Vernon manuscripts and Oxford, Bodleian Library, MS Bodley 789, the only English manuscripts discussed in this volume of Queeste. The compilers of these combined several clusters of texts from existing exemplars with sources from a wide range of other books, resulting in idiosyncratic text collections which were copied into codices in generic patterns with thematic focuses.

The purpose of this collection of essays is to raise awareness of the study of medieval book collections. This issue of Queeste succeeds in doing so by providing a broad range of inspiring examples that each demonstrate innovative ways of approaching medieval books and texts in collections. The collections discussed in the articles range from medieval libraries, dynastic book collections and convent libraries to miscellany manuscripts which are viewed as collections in their own right. The ways in which these collections are studied include analysing medieval & I book lists, marginalia and inventories, thus highlighting the importance of studying contextual evidence alongside the books themselves. Hopefully, this issue of Queeste will stimulate further research into this fascinating area.