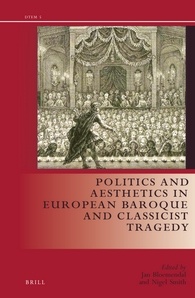 Politics and Aesthetics in European Baroque and Classicist Tragedy, edited by Jan Bloemendal and Nigel Smith, is a collection of 15 essays (the first of which is an extensive introduction by the editors) investigating the nature and uses of tragedy in a number of European countries in the early modern period. The focus is overwhelmingly on the seventeenth century; the final two essays address the eighteenth century. Most of the contributions strongly bring out the political implications of the tragic genre. By comparison, the ‘aesthetics’ of the title are less obviously represented; this volume is largely concerned with dramatic responses to and investigations of tyranny, sovereignty and resistance.

As a volume that discusses an international body of source materials, this is a very welcome contribution to the increasing scholarly interest in the connections between different vernacular literatures, as opposed to the traditionally narrow focus on ‘national’ literatures.

Such a cross-cultural and ‘multi-lingual’ approach has its potential pitfalls. For one thing, translating (long) quotations can potentially be quite cumbersome, and it is not always easy to address a mixed readership of native-speaking specialists and those unfamiliar with that specific vernacular and its literature. The contributors to this volume, however, admirably handle the inherent difficulties of writing in English about source materials in a variety of languages and make the material accessible to a wider audience – which, in my view, is one of the collection’s main assets and attractions.

The volume consists of four sections. Part 1 focuses on sovereignty, mainly in the work of the Dutch poet and playwright Joost van den Vondel. Frans-Willem Korsten discusses different interpretations of ‘Roman-ness’ and Roman law in the Dutch Republic, as it relates to civil as opposed to imperial rule. Russ Leo focuses on Vondel’s (and other writers’) interpretation of the biblical figure of Samson, drawing out interesting ways in which biblical material could be adapted to make subtle and sophisticated political points. Freya Sierhuis investigates the evocation of Catholic ritual and rite in Vondel’s most famous play, Gysbreght van Aemstel. She is one of the few contributors explicitly to address the importance of performance, performativity and the role of the audience in the theatrical experience.

Part 2 is devoted to religion, and specifically to Latin Counter-Reformation drama. The inclusion of Latin drama – and with it the inclusion of academic and other institutional drama – is among the most enlightening aspects of the collection. Neo-Latin writing often tends to be overlooked in academic studies (or viewed as a specialist subject in a category of its own). An unfortunate consequence of this is that the Protestant point of view so overwhelmingly present in the vernacular theatres of Northern Europe tends to dominate the critical discussion, to the detriment of the Catholic voice more usually expressed in Latin. All three contributions in this section work to redress the balance by bringing fascinating and important material to a new audience. Howard B. Norland’s essay discusses the performance of tragedies about historical and more recent martyrs (Thomas More, Thomas Becket and John Fisher) at the English College in Rome, providing a welcome counterweight to the substantial body of work on Protestant martyrologists such as John Foxe. James A. Parente’s chapter makes an important contribution by discussing the treatment of historical subjects in the plays of the prolific and important but too-little-known Jesuit dramatist Nicolaus Vernulaeus. Blair Hoxby’s chapter on Jesuit tragedians similarly emphasises Catholic uses of history rather than the much-discussed Protestant point of view.

Part 3, on ethics, is somewhat less cohesive than the previous sections. Emily Vasiliauskas’s essay on akrasia does in the end briefly address Shakespeare’s Macbeth, but is overwhelmingly concerned with Edmund Spenser’s poem The Faerie Queene and Romance more generally. As a result this chapter sits somewhat uneasily in a volume dedicated to the tragic genre in stage plays. Sarah Knight’s insightful investigation of Latin tragedy in early modern education would have fit well within the previous section on Latin drama; it, too, focuses largely on tragedies of tyranny and ‘unsafe kingdoms’ in the context of Reformation and Counter-Reformation polemic. This chapter further draws out interesting connections between the performance aspects of rhetorical training, drama and other literary forms such as (published) sermons. Tatiana Korneeva’s essay on the ethical (or unethical) behaviour of rulers and subjects is the only contribution to address Italian drama. This erudite discussion of the re-interpretation of Spanish sources in Italian plays in some ways serves to draw attention to the lack of Spanish material in the collection as a whole. Christian Biet’s chapter on French tragedy also focuses on politics, in this case on the political implications of the aesthetical decision to represent atrocities on stage. He convincingly challenges the assumption that French drama is ‘classicist’ in its avoidance of staging bloodshed, by discussing earlier seventeenth-century plays that allow their audiences to experience tragedy in much more visceral ways.

Part 4 on mobility comments on the ways in which texts speak to each other across vernacular cultures. Joel B. Lande’s contribution on the German Trauerspiel traces the development (and origins) of genre and poetic form, in the process drawing out important connections between the literature of the German lands and the Dutch Republic. Helmer Helmers similarly traces connections between different European stages and dramatic traditions, in this case using various incarnations of the story of Titus Andronicus. The discussion of the different ways in which England, Germany and the Dutch Republic were rewriting and appropriating a Roman past is an enlightening example of the insights that become possible when scholarship breaks through the traditional boundaries between vernacular traditions. The final two contributions, Nienke Tjoelker’s essay on French classicism in Jesuit drama and Kirill Ospovat’s chapter on the Russian dramatist Aleksandr Sumarokov take the discussion into the eighteenth century. This is an interesting coda to the volume, although the connection between the eighteenth-century authors and their seventeenth-century predecessors is perhaps not consistently clear.

In short, this is a very diverse collection that includes a wide range of source material and approaches. This does somewhat complicate the internal cohesion of the collection. Some of the contributors (including the editors in their introduction) engage directly with genre and form and take pains to articulate what precisely constitutes the ‘baroque’ and ‘classicist’ tragedy. Others interpret the brief mainly by discussing the work of important seventeenth-century (and some eighteenth-century) authors who happened to write tragedies. The introduction goes some way to providing an overview of the tragic genre from classical times. It also provides an illuminating section on the Low Countries as a ‘literary staple market’ and a hub of cultural exchange in the early modern period – an issue, I think, worthy of its own dedicated volume of essays.

Overall, the ‘European tragedy’ of the title seems to be an umbrella term to cover the contributions; this volume does not attempt to give a representative overview of the uses of tragedy across Europe. The Low Countries dominate the discussion, and the most immediately obvious gap is Spain, which is not represented apart from tantalising references by some of the contributors to the importance of Spanish sources for other vernacular dramas. That said, the collection forms a strong and timely reminder of the benefits of an international and inclusive approach to literary studies.